Extraordinary response at the BEYOND Festival 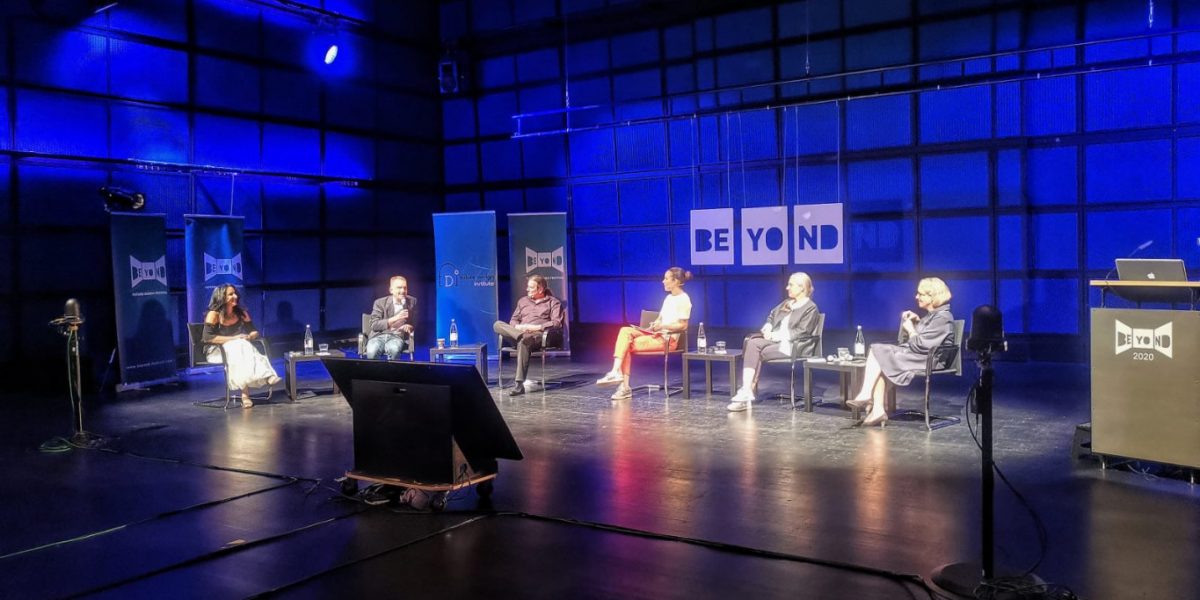 The 9th BEYOND “Future Design” festival ended successfully this weekend. This year the expert symposium, the film festival and the art exhibitions were drawn into virtual space due to the Covid-19 situation. For four days, live broadcasts from the ZKM studio were transmitted from 9:30 to 21:00.

The idea born out of necessity has increased the festival’s reach a hundredfold. The BEYOND “Future Design” festival, consisting of the international symposium FUTURE DESIGN and the simultaneously held film festival CLIMATE CHANGE, brought together artists, scientists, and activists from almost 40 countries.

The discussions with experts from the fields of art, science and technology focused on climate change in a broader sense. Discussion rounds were offered on topics such as artificial intelligence, future design, “Green New Deal(s)” and, as a highlight, “New narratives for the 21st century”. The sessions were moderated by Annabelle Mandeng, Kathleen Schröter, Ludger Pfanz, Gülsel Özkan, Christopher Schneider and Holger Volland.

The highlight of the numerous, also regional, roundtable discussions on climate change with, among others, Mayor Bettina Lisbach, Dieter Bürk (DGB), Jonathan Köhler (Fridays for Future/Scientists for Future) and Dennis Lehr (Climate Alliance), which focused on the topic “Global Thinking – Regional Action”. These and many
other discussion groups will be available on the platform and social media such as Facebook in the future.

After four days of intensive online discussions, art exhibitions and numerous international films and panels, the winners have now been announced. *

The jury was composed of film and media experts from all over Germany.**

The winners of the film festival are: Jared P. Scott (USA) with his film “The Grea Green Wall” USA, Christoph Hertel (Germany) with “After us the flood” and Davide Marinho (Italy) with “Talamanca”.

Every year the BEYOND-Festival awards the “Best Tought Award” of the FUTURE DESIGN-Symposium. This award was given to Elizabeth Wanjiru Wathuti, Kenyan environmental and climate activist and founder of the Green Generation Initiative, which encourages young people to love nature and be environmentally conscious at a young age. She has now planted 30,000 tree seedlings in Kenya with her initiative.

“With the award of Elizabeth Wanjiru Wathuti, we honour not only her commitment and initiative, but also the young people on our planet who, day after day, are committed to our future and to living together with all other actors in our Biosphere Earth. These young people challenge us every day to take on our share of responsibility for what we have in common,” says festival founder and director Ludger Pfanz, explaining the reason for this honour.

The festival was streamed live on the website and shared on several social networks. In the social networks alone, there were 86,200 impressions and 33,000 video views. The Future Design platform, which was set up specifically for this purpose, still needs to be evaluated. The lectures and panels of this year’s event will continue to be available on the website www.beyond-filmfestival.com and in social networks. “We are overwhelmed by the response” comments festival manager and head of the Gülsel Özkan film festival. “It shows that our themes are more and more resonating in the middle of society.”

All fifty festival films are available on demand and can be viewed until August 10th. In the coming months, the online platform will feature further conferences, workshops and projects under the motto FUTURE DESIGN. More information: www.beyond-filmfestival.com and www.beyond-festival.com