Anxiety is keenly felt within today’s hyperreal world. Increasingly, humans are disconnected. A Cloud On Fire is an experimental reflection on the subjective sensation of anxiety, its different dimensions, and absurd proportions. – an experimental documentary 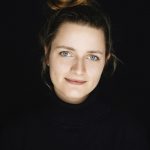 Julie Gaston is the author and director of “a cloud on fire”. She was born on May 28, 1993 in Weilburg (Germany) and lives and works since 2015 as a freelance artist and filmmaker in Offenbach am Main. After completing secondary school with a degree in design in Frankfurt am Main and subsequent internships at the Frankfurt Opera, Gaston decided to study stage design and costume design at the Hochschule für Gestaltung in Offenbach. During her studies she developed a great passion for the medium of film and changed the field of study to free art to realize her first film “Hänsel” in 2015. In March 2019, she is expected to complete her diploma at the Hochschule für Gestaltung before devoting herself to the realization of her first feature length film. Since 2013, Julie Gaston volunteers for the protection of children.

As the board member of a child protection association, she initiated numerous actions and art projects for children. She wants to point out the grievances in dealing with children and provokes viewers of her films with taboo subjects such as child suicide. For this purpose, Gaston is always looking for professional support such as specialists and universities to give the artworks a sound background. In addition to working in film, Gaston is also active as a performance and installation artist.

Did you ever try to talk about your fears?

You cannot really describe fear, you can only perceive it. With my film “a cloud on fire” I tried to bring the fears of others to an audiovisual level. I think film has a unique ability to enable a deep level of empathy for emotionally complex, subjective topics, that are hard to explain with words. While working on this film, I have learned to handle my own fears and I hope that others can benefit as well.