In the midst of a desolate wasteland, a farmer boy hopes and dreams that he may one day see a real live bird. Amidst the wreckage of climate change and on the heels of mass extinction, little AYEO represents the future of humanity if climate change is not addressed. In the parlance of the Internet, AIO means “All In One”. Spelled a little differently, little AYEO represents the reality of our interconnectedness and our need to behave as one people. 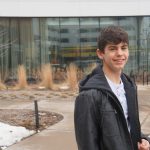 Jacob Updyke was a sophomore at Millburn High School, NJ when he decided to teach himself animation in order to spread awareness around an issue he felt was not getting enough attention: Climate Change. Jacob spent seven months teaching himself, through trial and error, how to animate. His first film, “You Reap What You Sow”, was an official selection at over 20 film festivals and won 10 prestigious awards.

Now a junior, Jacob completed his second film “One Man’s Trash” in April 2019. Always socially conscious, his new movie AYEO was released in February of 2020. 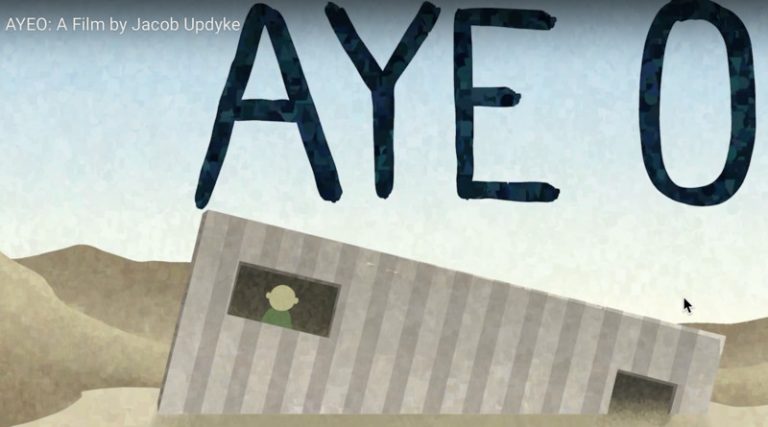 Q&A with Jacob Updyke
Q. How did this all get started?
A. I’ve always been enchanted with animated story-telling, and, as the industry has grown to portray much more realistic and relevant issues, I wanted to emulate this with my own work. Additionally, I felt (and still feel) as though a lot of people are unaware about the current state of the planet’s environment and climate. People hear the terms “global warming” and they’ve almost become desensitized. They don’t truly grasp the gravity of the situation.
Q. Let’s talk about You Reap What You Sow. Why did you choose to make YRWYS in black and white? What is the significance of the blue facemask at the end of YRWYS?
A. Black and white sets a mood of darkness and hopelessness, and I wanted the audience to feel that way. The face-mask at the end just is a reminder that we are losing our ability to breathe. I find this terrifying.
Q. What is your process for animating?
A. Prior to YRWYS, I have never done a full-blown animation before. I started out using free software called Krita. After working with it for a month or so, I realized there were many better tools out there. I then moved to Adobe. I also was lucky enough to get a Wacom Mobile Studio Pro 16 tablet halfway through the animation. This helped a lot. It took me seven months to animate 2 minutes because I was learning through trial and error. You can actually see my progression as an animator as the story moves forward. Ultimately, I made 1600 frames by hand and spent seven months on that first film.
Q. What do you think each individual can do to affect the future of our planet?
A. Push for large scale change. There is a common misconception that in order to help the environment, individuals need reduce their personal impact – and while this is helpful, the reality of the situation is that the actual threats to our environment are more likely to come from corporations and industries which produce huge sums of fossil fuels.
Q. Tell me about One Man’s Trash. How did that film come to exist?
It was the product of a collaboration I did with the Millburn Environmental Committee, which is made up of township residents, parents and students here in town. They wanted to something special for Earth Day. They wanted to create a PSA for the town’s Earth Day efforts and they heard about YRWYS. The approached me and asked me to come up with a concept. I had just seen a documentary on the Great Pacific Garbage patch, so this seemed like a good topic.
Q. What about AYEO? What is the meaning of his story?
A. AYEO, like YRWYS, is a story that takes a look at a likely future if we continue to abuse our environment. In the case of AYEO, he is one of humanity’s last survivors – barely hanging on in a world with dirty water, the loss of animals and people. He dreams of one day seeing something we take for granted: a bird. When his dream comes true, he follows the bird and provides us with a tour of his landscape, a grim wasteland destroyed by pollution and global warming. In my research, I came across many modern-day communities that are forgotten in remote parts of the world where children live surrounded by trash and lack access to potable water. It scares me that AYEO’s plight is not as futuristic as we might like to think.
Q. What are you hoping to spark with your films?
A. I hope they will spread awareness about the subject of climate change and ecosystem destruction. We are becoming increasingly more disconnected from these matters and it is my greatest fear that we leave them behind entirely.